A large part of the many tourists in Vienna take part in a city walk or a city tour. There are very many different providers. In the following we would like to present some offers.

We have selected city walks that have received good reviews from participants on the internet and are not too expensive.

Simple city tour in the centre (just under 2 hours)

A very good, classic city tour through the city centre, bookable in the internet on this website. You walk through Vienna in a group. The city guides on this tour are very informative, educated and have a sense of humour. Questions are answered gladly and competently. On one hand, one sees the classics as the Hofburg or St. Stephen’s Cathedral. Further exciting stations of this city tour are for example the famous Blutgassen quarter or the white horses of the Hofreitschule. What we specially liked was the short visit of a typical coffee house of Vienna.

It is a great city walk with lots of information. We think that this city tour is specially recommendable at the beginning of a trip to Vienna. One gets a good overview, later, one can have a look at everything again in peace. The tour is only in German, it is not an annoying multilingual tour. The participation costs 17 euros (as of the beginning of the year 2021), children under 14 years pay half. As far as we know the starting time is daily at 14 o’clock all year round.

You can book this city tour on the Internet and cancel it free of charge at the following provider up to 24 hours before the tour:

>>> More information, current prices and booking on the website Getyouguide

To get to know Vienna in a completely different way is a city tour with tourist buses. These buses run on 5 fixed routes (in winter 4 lines) with many stops, you can get on and off where you want and continue with a later bus. In total, the Hop-on / Hop-Off buses take you to almost all important sightseeings in Vienna, also to the many attractions outside the city centre. As the departures are quite frequent, the waiting times are not too long. In the bus, one is informed by headphones about the respective next attraction. A walking tour through the city centre of Vienna is also included (in summer every day, in winter several times a week, more details when booking online at Getyourguide.de ). 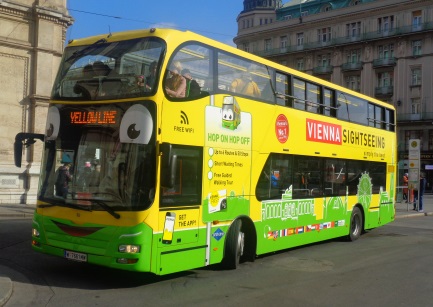 There are tickets for the tourist buses for 1 day, 2 days or 3 days. Also this tour through Vienna can be cancelled free of charge up to 24 hours in advance by booking online through the well-known website Getyourguide.de. As with the double-decker buses, one gets practically to all important sightseeings of Vienna, one saves the tickets for the public transport.

Examples of sights and other attractions that can be reached with the Hop-On Hop-Off buses Vienna: Schönbrunn Palace including Vienna Zoo in the palace garden, the Prater amusement park with the famous Giant Ferris Wheel in the Prater and wax figures in Madame Tussauds Vienna, UN-City, Danube Island, Danube Tower, Augarten, Naschmarkt market, Burgtheater, Hundertwasser House Vienna, Liechtenstein Palace, Vienna State Opera, many museums and much more.

Of course you can also visit all important sights in the city centre on foot (Vienna Cathedral, pedestrian zone etc.). In addition there is the above mentioned city walk.

City walk with your own city guide

You do not necessarily have to do a city tour through Vienna in a group. One can also rent an own guide.

Disadvantages: Those who book an own city tour through Vienna will of course have to pay a higher price compared to a participation in a group tour.

Our suggestion: The following city tour has very good reviews and can also be booked through the website Getyourguide.com. In our opinion, the price is surprisingly low with from 50 Euro for 2 hours and depends on the number of participants and the length of the tour. It is possible to book a guided tour through Vienna with your own city guide for 2 hours or longer (up to 6 hours).

>>>>  More information and possibility to book at Getyourguide.de

Tour through the underworld of Vienna: excavations from the Middle Ages, crypts and the like. Interesting city tour for people who are interested in the history of the city. >>> More information at Getyourguide.com