St. Stephen’s Cathedral Vienna (Stephansdom) has a total of 4 towers. The high church tower is the south tower with a height of 136 meters. The north tower was never finished, it is therefore only about 58 meters high. The two smaller towers are called Heidetürme (left and right Heideturm, 66 and 65 metres high).

You should buy the ticket for all the church online:  >>>>>> More info and online-tickets

As a tourist you can visit two towers of the Stephansturm:

Climbing the South Tower is exhausting. You go up 343 steps, there is no elevator. But you will be rewarded with a magnificent view over Vienna. Among the inhabitants of Vienna, the south tower is called “Steffl”. Because of its great height, the Steffl is regarded as the actual tower of St. Stephen’s Cathedral (also more rarely called Stephan’s Church). For many Vienna tourists, climbing the steeple is one of the highlights of their trip to the great city of Austria.

The ride to the north tower of the St. Stephen’s Cathedral by lift is easy. This church tower is also called Adlerturm (Eagle Tower, Adler Tower). The view from the north tower is also good, but from the much higher north tower the panorama is much better in all directions. The interesting thing about the North Tower is the biggest church bell of Austria. The bell is called “Pummerin”, weighs about 20 tons and has a diameter of 3,16 meters. The lift to the north tower (Adlerturm) is therefore called “Aufzug zur Pummerin”. Aufzug is the German word for lift. 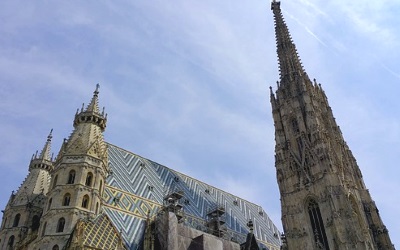 The ride with the elevator to the North Tower (elevator of the Pummerin, Adlerturm): 6 Euro, children 6 to 14 years 2.50 Euro

The tower ascent on foot to the Steffl (north tower) is possible every day from 9 am to 5:30 pm. The opening hours of the North Tower (Adlerturm) are similar: Daily from 9:30 to 17:30.

On Sunday morning, however, one cannot visit the interior of the large St. Stephen’s Cathedral Vienna because of the divine service, this is similar on some holidays. Also the visit during the week is better, because less is going on. St. Stephen’s Cathedral is well visited in summer and on weekends and there are crowds, especially on the two towers. Those who can should come during the week, especially in summer. 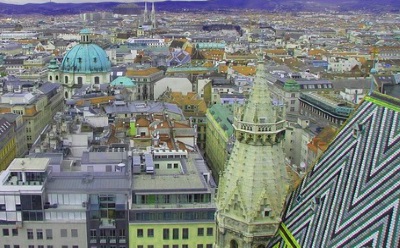 Tip:  The cathedral of Pisa and its famous Leaning Tower