In some cities of the world cemeteries are among the famous sights. This is mainly due to graves of very famous people. For example, many fans make a daily pilgrimage to the grave of Jim Morrison at the Père-Lachaise cemetery in Paris. But nowhere else in the world are so many great personalities buried as at the Central Cemetery (Zentralfriedhof) in Vienna’s Simmering district.

Especially the graves of the great musicians are world famous. These include none less than Beethoven, Strauss, Schubert and Brahms. There is also a memorial grave for Mozart, but he was actually buried at Sankt Marxer Friedhof, also in Vienna. Modern entertainers such as Udo Jürgens, Hans Moser and Falco also have their graves in the Vienna Central Cemetery. In addition, many other personalities such as politicians like Bruno Kreisky or the Austrian Federal Presidents. In total, the number of honorary graves at the Vienna Central Cemetery (Zentralfriedhof) is now about 1000.

Size of the Central Cemetery Vienna

The enormous size of the cemetery is impressive. Since its opening in 1874, 3 million people have been buried in the Central Cemetery. That is much more than Vienna has inhabitants today. Currently, there are about 330,000 graves in the large cemetery in Vienna. 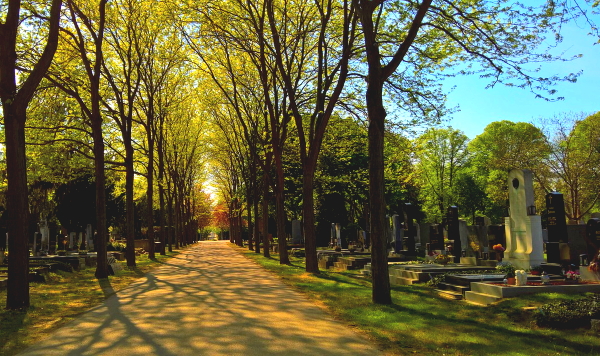 For a long time, the Vienna Central Cemetery was the largest cemetery in Europe. It was expanded many times. Today, the Vienna Central Cemetery has an area of an incredible 2.5 million square meters. One should think carefully from which side one enters the cemetery. If the grave you are looking for is on the other side, it is quite possible to walk for half an hour. There are entrances on all sides. Many entrances can be reached by subway or streetcar.

How to get there and which entrance should you use?

As I said, the Vienna Central Cemetery is gigantic. From one end to the other it is quite 3-4 kilometers. Almost all the important celebrities like the classical musicians are in one section in the cemetery. To see the graves of Mozart, Beethoven, Schubert, Strauss (father and son), Brahms and Udo Jürgens, take the 2nd gate. The streetcar lines 11 and 71 have stops here “Zentralfriedhof 2.Tor”. One goes into the cemetery. on the right is the funeral museum, on the left is among other things a sausage stand. 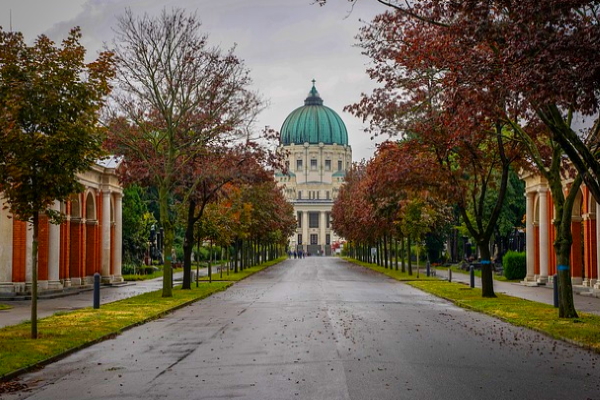 Walk straight ahead on the wide path (see picture) towards the large, clearly visible church. Barely 100 meters before the church on the left are the honorary graves of classical musicians. Strauss, Beethoven, Brahms, Schubert and the monument to Mozart are next to each other. You should also look at the church and the honorary graves of the Federal Presidents of Austria just before the church. The grave of Udo Jürgens (died 2014) is on the left in front of the church.

The grave of the musician Falco (Rock me Amadeus) is unfortunately a short kilometer away from the other super celebrities. The grave of Curt Jürgens (died 1982) also has many visitors. It is not far from the graves of classical musicians (Beethoven, etc.).

How to get to Vienna Central Cemetery: Take the U3 subway to the Simmering terminus (orange line). Then continue with streetcar 11 or 71, only four stops to the stop “Zentralfriedhof 2. Tor”.

The Central Cemetery is divided into many parts, which are numbered. Almost all important musicians are in section 32a

Ludwig van Beethoven, like franz Schubert in the neighboring grave, was first buried in the Währinger Cemetery in Vienna. Later he was reburied. The Beethoven grave is probably the best known grave in the Central Cemetery Vienna-Simmering. It is also probably the gravesite with the most visitors. 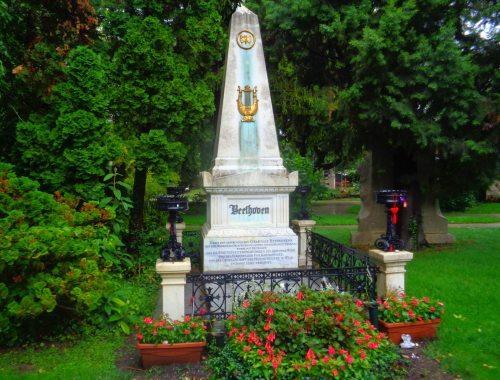 Only a few meters from Beethoven are buried Johann Strauss father (Radetzky March) and Johann Strauss son (“inventor” of the waltz, Danube Waltz) . Johannes Brahms and others were also buried here. Central cemetery area 32A

The most famous Austrian musician Wolfgang Amadeus Mozart also has a grave in the cemetery. However, he was buried at the St. Marx Cemetery in Vienna. So the grave at the Vienna Central Cemetery is more of a monument or memorial to Mozart. It is right next to the other great composers (Beethoven, etc.). 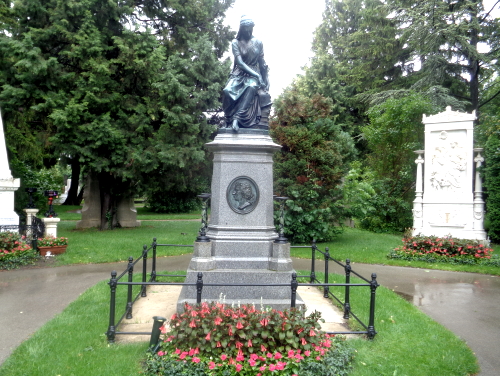 The biggest burial is the last decades at the Central Cemetery was probably, besides the singer Falco, the burial of the singer Udo Jürgens in 2014 (Greek wine and many other famous songs). The grave is in the area 33G. Also like the composers coming from gate 2 in front of the church, but much farther to the left and a little closer to the big church. A beautiful, modern grave. 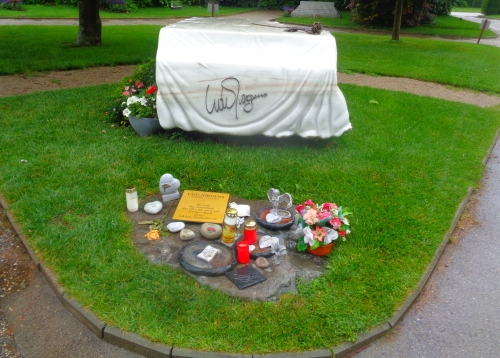 Unfortunately it is quite far to Falco’s grave, he is buried in another area of the Central Cemetery, far away from the other super celebrities. Central Cemetery area 40, about 1 kilometer from the above mentioned graves. Falco died in a car accident in 1998 in the Caribbean.

The Federal Presidents’ Crypt, just in front of the big church, is also a place of interest. Here are buried the six dead federal presidents of Austria after World War 2 who passed away. 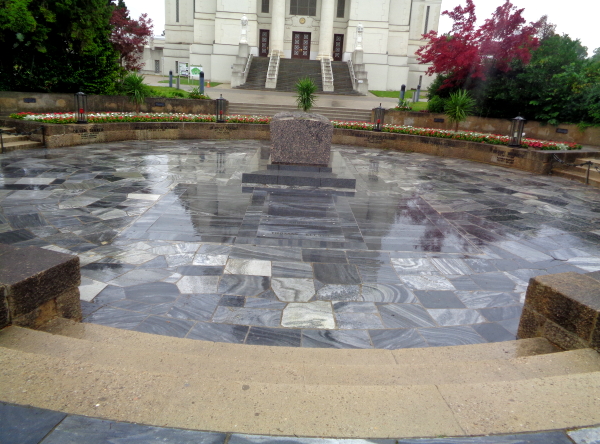 Such a large green area of several square kilometers as the Vienna Central Cemetery is naturally also home to many wild animals. The many flowers attract bees and colorful butterflies. Of course, there are also squirrels, etc. in large numbers.

But the deer are interesting. They live in the quieter, less visited regions of the largest cemetery in Austria. Some visitors are even said to come to the cemetery just to watch the animals. 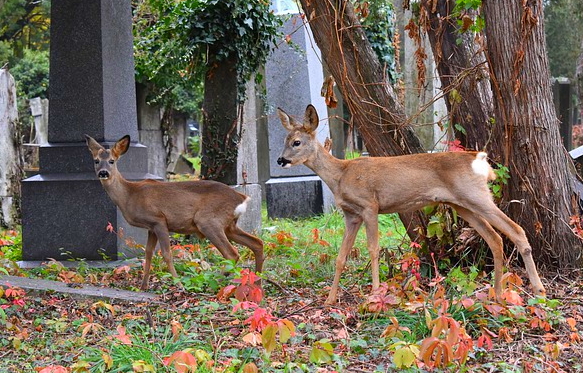 Song about the Central Cemetery Vienna

There is a very famous song, especially in Austria, about the big cemetery in Vienna-Simmeing. It is one of the biggest hits of the singer Wolfgang Ambros, who sings in Austrian dialect. Here is the song (Youtube video) with subtitles: